What causes a ute chassis to bend?

Overloading for crossings like the Simpson Desert or the Canning Stock Route can take it’s toll. Weight is the number one issue out here. Nothing succumbs like a dual cab. Towing a camper or not. Ron Moon explains below his experience with cracked chassis and it’s not so uncommon occurrence.

What causes a ute chassis to bend?

What causes a ute chassis to bend and how to prevent it from happening.

WHAT causes a ute chassis to bend? Ron Moon slips under the bodywork to discover the cause of chassis failure…

We were standing out the front of the Birdsville Roadhouse talking to Peter Barnes, the long-time proprietor of the service and repair centre that most Simpson Desert travellers at least stop and grab some fuel at, before or after their desert adventure.

Barnesy, as most people know him, is probably the single-most-experienced person when it comes to the Simpson. Having run the auto centre, and its repair and recovery service, for more than 20-odd years (given a break here and there), there is little he hasn’t seen or experienced first-hand when it comes to desert travel.

“See that ute there?” Barnesy said, as we watched a dual cab towing a trailer hit the small dip going into the caravan park across the road. “He’ll be over here soon.

“I see it all the time – it’s our most common repair,” he continued. “They hit that bump, and you can see the gap between the cab and the canopy open up and close. I hope he’s finishing his trip and not just starting it – we’ll just patch him up and send him on his way home – can’t do much else really.” 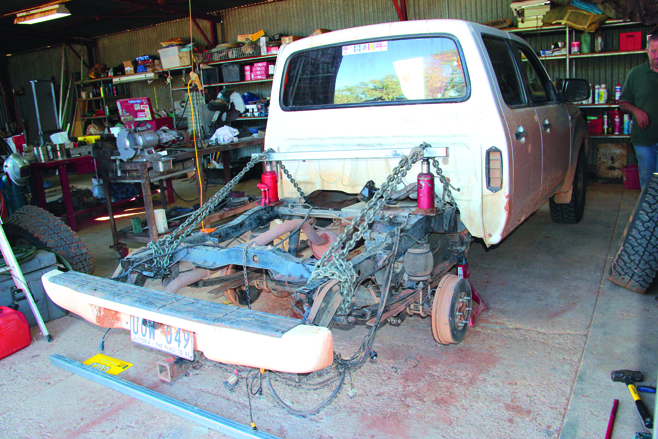 On the other side of the desert at Oodnadatta, I spoke to Dave at Mt Dare and his story was much the same. In Alice Springs, at the ARB store, branch manager Matt Wyatt has been having similar experiences. So what’s to blame?

Do some internet research and you’ll see heaps of examples and a plethora of reasons and lame excuses – with overloading the vehicle and the use of airbags to help carry the load cited as the major reasons for chassis failures.

BROKEN DOWN IN THE OUTBACK? Here’s what to do

Over the years, we’ve had a fair amount of experience with cracked chassis; it’s not a new problem. What is new, however, is the number of dual cab utes running around and tackling desert tracks, the number of people towing trailers, and the now widespread use of airbags as an aid to vehicle suspension when carrying heavy loads.

Back in 2001 we ran a trip across the desert along a number of the Beadell Roads. One of the participants had an extremely overloaded dual cab, mainly with the amount of fuel he was carrying (he didn’t have a trailer or airbags to aid suspension). When we suggested it wasn’t required as we were passing fuel outlets, he replied that he wasn’t going to pay those “rip-off bastards” when he had enough fuel to do the trip. He ended up paying in other ways! We welded up his chassis west of Well 33 on Wapet Road, and again when we had better gear at Eighty Mile Beach. 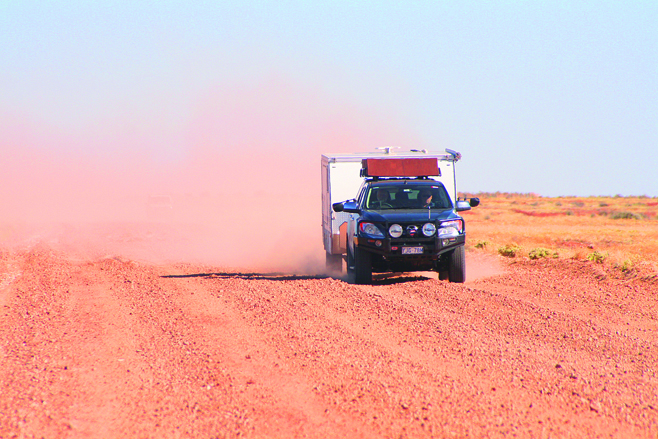 In 2004, before we stretched my Patrol, we were nearing the end of a seven-month trip that had taken in some cross-country travel south of the Cooper Creek, some remote sections of the Gulf Country and two complete laps of the Kimberley off the beaten track. Just as we were coming back from Steep Point and Dirk Hartog Island we noticed we had cracked the chassis of the hard-working Patrol. At the time, we were towing a trailer and we had the heaviest duty coil springs we could find under the rear of the Patrol, but there were no airbags.

Dave at Mt Dare and Barnesy agreed that they had seen all makes and models break, including the new Land Cruiser dual cab. Matt at ARB in Alice commented: “Despite many of the vehicles used out here being Toyotas, we seem to see a low proportion of those compared to, say, Mitsubishi or Nissan. It’s worth noting that within Nissan, the D40 doesn’t seem to fare as well as the D22.”

All agreed that weight played an important role, with Dave saying: “For the most part, all the vehicles were grossly overloaded.” Matt went one step further in stating: “The vehicles were overloaded in the majority of cases and it’s frightening how many people don’t know how much their vehicles weigh and don’t understand the potentially catastrophic failures that can be caused by overloading.” 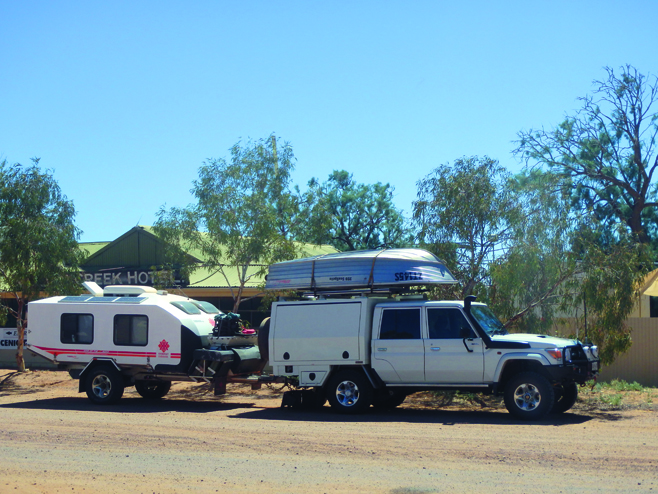 All three men agreed that trailers were a contributing factor to the problem. “Trailers make the problem worse and more common… and not just in the Simpson – any dirt road that has a dip or gully can result in a bent chassis,” Dave said. “A heavy ball weight has a significant effect on the chassis, as the 4WD pitches forward and back it accelerates the trailer ball mass up and down with a jerking motion.

“It’s the acceleration of this mass that will contribute significantly to bending and cracking of the chassis,” he continued. “A longer hitch or towbar, as fitted to some utes with a long tray (itself an issue), compounds this problem of shock loading to the chassis.”

HOW TO: Prepare for an outback trip

More recently, airbags feature in an uncommon number of chassis failures. “They’re one of the major factors in bending chassis. They point load the chassis and the chassis on these leaf-sprung vehicles hasn’t been designed for that,” Barnesy said. Dave was more circumspect: “There are a number of factors involved and airbags are certainly a contributing factor, but I don’t reckon they are the biggest issue.” 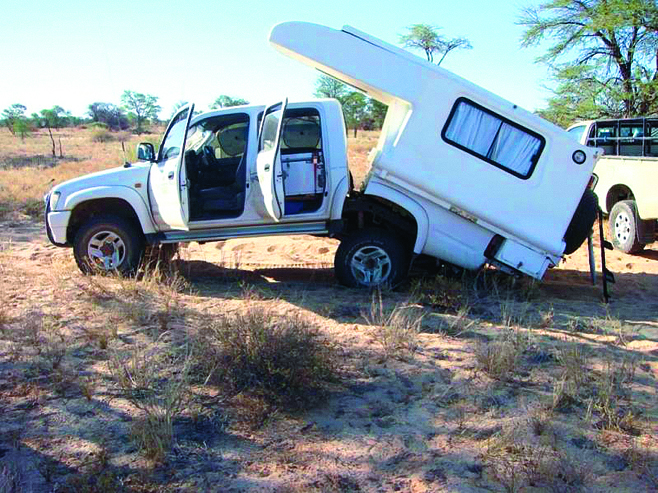 Matt, from Alice, had a stronger opinion when asked if airbags were the major issue (maybe because he manages an ARB store with OME suspension available): “God yes. I can’t count the number of people who have been told ‘Just bung a set of airbags in it and she’ll be right’, not realising that it’s a Band-Aid solution that doesn’t fix the real problem but just hides it. Their suspension isn’t doing the job it should be doing, and until they upgrade to some well-sorted aftermarket springs and shocks, they’ll continue to have issues.”

He continued: “Bent chassis are easy to find around Alice during tourist season, most of them on vehicles with airbags and leaf springs. The point loading that the airbags create (rather than being spread over the length of the chassis occupied by a leaf spring) means that any weight aft of the bags, or towed weight, is likely to cause issues. Throw in the horrendous pounding these vehicles cop on our corrugated roads and you have a recipe for an unscheduled extension in Alice.”

For another expert opinion on airbag suspension, we spoke to Beau Smith, the sales manager of Polyair Springs; arguably the oldest and biggest airbag suspension supplier in Australia. He, like me, knows of an awful lot of vehicles without airbags that have cracked their chassis. “100 per cent of photos and stories I have heard regarding this issue is to do with vehicles that are carrying huge amounts of load and/or towing. Most people that have this issue are not aware of the weight they are carrying and many are over their GVM without realising it,” he said.

Importantly he added: “Airbags are in no way designed to increase the vehicles GVM, we clearly state this on our marketing hand-outs, product packaging and instructions. 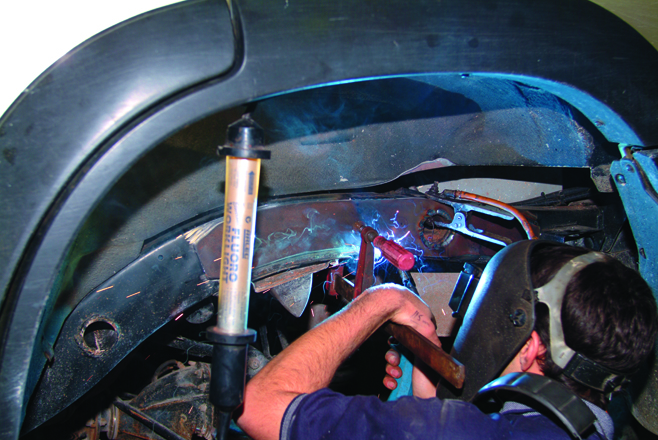 “From an engineering stand point, the airbags create a third point of contact (usually at the bump stop strike plate which is designed to handle severe impact) to ‘assist’ in the load carrying of the vehicle,” he continued. “In cases where we know the vehicle will constantly be on its upper limit of capacity, we recommend that the leaf pack and even shock absorbers be upgraded from factory spec for a more even load share along the chassis rail.” Sounds like good advice to me.

Speed also came into the equation, but as both Matt and Barnesy stated: nobody owns up to that or their own foolishness. Dave was quick to point out that speed is always a factor as dips and gullies are what cause the problem; the bottoming out of the suspension bends the chassis.

There’s another factor hinted at: as soon as you drive off the blacktop, everything changes – corrugations, rocks and whoopty-doos play a significant role in how your vehicle behaves. “It’s mainly dirt roads that will bend a chassis, you’ll rarely do it on the tar,” Dave said.
And it’s only the rare car company that makes any allowances for dirt roads; most prominently, Land Rover changes their maximum tow weights from 3500kg to just 1000kg when off-road. 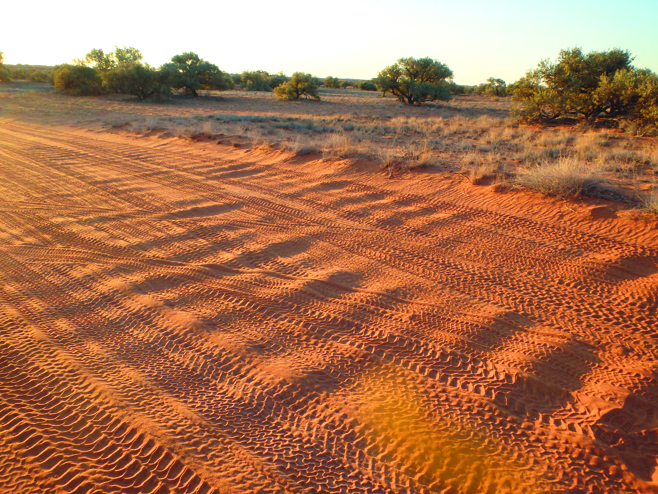 It seems there are a variety of reasons as to why people are cracking chassis and breaking utes, but a heavy load is a major common denominator. A poorly set-up vehicle with a heavy load means it’s sitting on its bump stops and is a prime candidate for a broken chassis – all it has to do is hit one more whoopty-doo or gutter. Throw in a good dose of speed and you’ve got a chassis just waiting to break.

It’s hardly surprising that people who use common-sense and a steady hand, when off-road, encounter fewer problems. It doesn’t take the “know-it-all” cowboys long to bust their equipment and their rides. Then they blame the equipment, the aftermarket accessories, or the truck… never themselves! As a couple of informants said: “You can’t ban stupidity!” 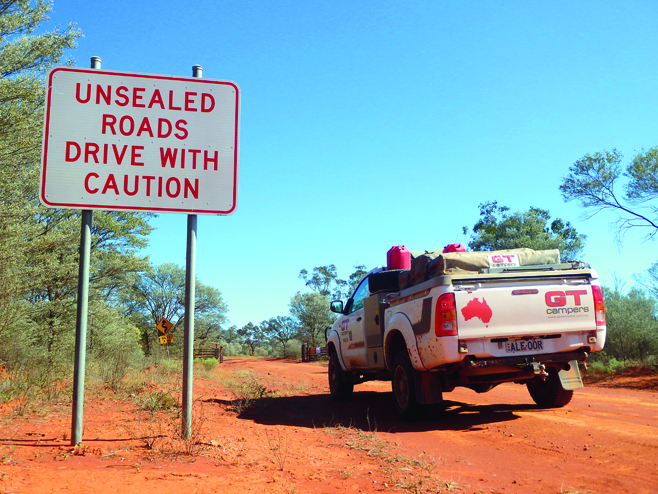 So, what are our recommendations after speaking with the experts?

First up, know what your vehicle weighs – especially when it’s fully loaded. Most people will be shocked when they run their rig over a weighbridge. Remember, the GVM of a vehicle includes everything you’ve packed, the accessories fitted, the fuel and the occupants.

Set up your vehicle’s suspension properly by talking to a suspension expert and fitting a good-quality aftermarket suspension. If you’re going to use airbags, of any sort, make sure you fit the appropriate ones. For example, Polyair have three different sized bellows to suit leaf sprung vehicles; but be careful not to run them over-inflated.

Keep an eye on the car’s weight when packing for a trip and load heavy items including jerry cans, tools or water as far forward as possible. Keeping weight to a minimum – in both your vehicle and trailer – is always a good thing.

If towing a trailer; note the overall weight of the trailer, the ball weight and how you load it.

Finally, slow down when on a dirt road or track. Hitting any whoopty-doo, creek, gully or gutter at speed is bound to cause issues. The damage mightn’t be noticeable immediately, but it certainly will be further down the track.

Get the latest info on all things 4X4 Australia by signing up to our newsletter.